A downloadable game for Windows

A non-profit fan game based on Danganronpa, NicoB, and the Picky Penguin Community.

16 talented high-schoolers suddenly find themselves captured aboard the mysterious S.S. LP by the maniacal Monoguin and forced into a death-game with a simple rule: murder one of your classmates to escape, without getting caught.

The project is in development, with a demo of the first half of Chapter 1 available!

We welcome feedback! Let us know what you think by commenting or messaging us on our Twitter or YouTube!

If you encounter any bugs, we would appreciate it if you reported them through this form!

My only suggestion is to allow controller support for PS/Xbox. I prefer some games with a controller and it just comes off a bit better IMO.

I love this demo! And Pup is so wholesome- I spend my free time the whole time on him and during the end i was like: DON'T LET HIM DIE-

Hey uhhh, which button to press to play?

Lmao ok, I'm starting the demo now, but letting you know the controls really threw me off. Even with a ton of games with Z as confirm, I thought I could confirm through Enter, Space, or clicking and I was so confused why I couldn't get past the menu. Especially since the initial screen says "Press Enter", so why wouldn't that be a confirm button?

A nitpick I know, but it threw me off so much I thought the game was bugged at first before I took a look at the READ ME file.

Very good demo. Out of the fangans I have played, this game, along with Danganronpa NWO, are two of my favorites.

A minor typo exists in the Emile free time. Instead of "capital F," the phrase "capitol F" appears.

im have one bug to report

the demo was really fun! can't wait for the full game!

Alrighty then I have a few opinions to speak on. So let's get this out of the way, the games good! its fun to play and interact with the characters, however, i do have to admit some of the characters have pretty odd ultimate skill that wouldn't really make sense in a real life situation, but this is a game so it doesn't matter much. on to other notes; there are some things that are pretty odd abut this Demo such as the absolute silence do to lack of any voice acting whatsoever, now i get why you wouldn't have someone voice Nico since he is a real person, however, al the other characters would be majorly helped by any voice acting whatsoever even just short snippets; now yes i know doing something like that would make this game take forever longer, however, even if it takes longer to come out th end product will end up coming out as something much better than i could have originally be. On too the guess and theory section, the person who dies has to be either the blue hair girl or yellow hair with one of them being the antagonistic characters, as there tallents (ultimate mind reader, and ultimate analyst) are bullshit talents that would break the game unless they are antagonists as what kind of class trial would one be if it started with blue hair and yellow instantly calling out the killer.

That scenario does seem likely.  A perp killing the mind reader first would make a lot of sense.  That ability would cause tremendous problems for a killer and such an individual would need the mind reader out of the way.

If the mind reader is in fact the killer, then she would need the analyst dead to have a solid chance of successfully framing someone.   Her downfall would come from Nico's ability in that case.

Why did it take so long for me to find out the demo dropped?! I am SO on this, Picky Penguins!

Loving the cast so far!  Though I can't help but wonder: How long will it take to find and implement voice acting? 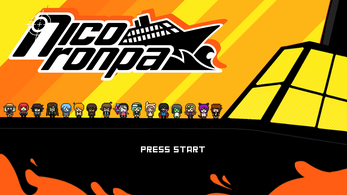 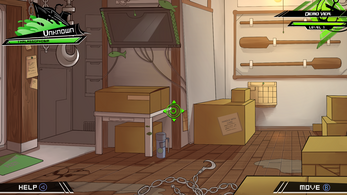 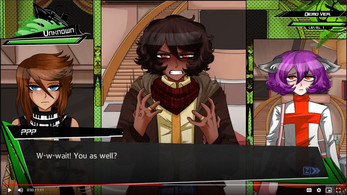